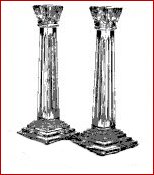 The craze for all things Colonial-related was reaching new heights, and in the first auction of this material, held in April, 1917, he offered many interesting and rare Washington busts, portraits, mourning items and other Washington-related memorabilia. He also offered personal relics, including George Washington’s shoe and sword buckles, wine glasses, snuff boxes, coat buttons, pants, a pair of Sheffield candlesticks from Washington’s Mt. Vernon desk, and many more items.

These relics were eagerly snapped up by the preeminent collectors of the day, including William Randolph Hearst and G.D. Smith, the man who single-handedly helped Henry Huntington assemble the famous Huntington Library and one of the greatest American book dealers of all time.

All seemed well until William Lanier Washington showed up at the Anderson Galleries with yet another cartload of Washington relics, at which point Mitchell Kennerly had the sense to send him packing. Not to be so easily discouraged, William simply switched venues and took his “relics” to the American Art Association, through which he held another sale in February, 1920.

He also sold his offerings door-to-door, and it was this which brought about the premature demise of G.D. Smith. On March 4th, 1920, William Lanier Washington arrived at Smith’s door, attempting to sell him yet another set of Sheffield candlesticks used by George Washington on his desk at Mt. Vernon. Smith, who had already bought “the” pair at the 1917 auction (lot 27), questioned just how many candlesticks George Washington kept on his desk, got into a heated argument with Washington, and dropped dead on the spot.

Thus ended the career of one of America’s greatest booksellers. William Lanier Washington would hold one more Washington-relic sale at the AAA, in February, 1922, which finally seemed to exhaust his supply. He died in 1933, but the legacy of his auctions, which contained at least some authentic memorabilia, and a whole lot else, continues on through the auction catalogs and an interesting tale.