Albini, F. de. Marie Antoinette and the Diamond Necklace from Another Point of View. London; Swan Sonnenschein & Co., Ltd.: 1900. A fascinating study. Albini takes the view that the Countess de la Motte was, basically, telling the truth- that the Queen did order and then conspire to hide the necklace, that she did carry on a correspondence with the Cardinal, and that in fact Jeanne's death in London may have been a ruse, and that she died in France in 1844. Hardcover. 5.5"x8", xxiii + 204 pages; 4 b/w plates. Covers with some scuffing, tips bumped, etc; hinges a bit tender, front hinge with slight glue residue or something that has slightly torn the paper along a 2: strip; original stationer's bookplate with what amounts to a c.1900 remainder tag- "This book published at 6/- Is now offered for sale at 2/- s" pasted across the stationer's label. Some light spotting and soil. [04462] $125.00

Carlyle, Thomas. The Diamond Necklace. Boston; Houghton Mifflin: 1913. Printed by the Riverside Press in Cambridge in an edition of 400 copies. First published in 1837 in 3 consecutive issues of "Fraser's Magazine", this was one of the 19th century works that made the story of the Diamond Necklace internationally popular again. Carlyle noted in a letter to his brother that "my attempt was to make reality ideal...the story of the Diamond Necklace is all told in that paper with the strictest fidelity, yet in a kind of musical way". Although Carlyle's piece does have its fans, many today would find it a bit "flowery" and overblown. That is not to say it does not have its moments- who could fail to admire the description of the Cardinal de Rohan as a "dissolute mud-volcano..."? Hardcover. 5"x8.25", 168 pages, illustrated with decorative vignettes at many of the chapter ends, a very handsome printing. Light soil, a little dusty. [04460] $60.00

Funck-Bretano, Franz. Cagliostro and Company. A Sequel to the Story of the Diamond Necklace. London; John Macqueen: 1902. Despite the title, this is not simply an account of Count Cagliostro, but holds much additional information about various aspects of the Diamond Necklace affair, gathered from period accounts and pamphlets. Translated by George Maidment. Hardcover. 5"x8", 287 pages, 9 b/w plates, 1 b/w illustration; light soil, text a bit browned, small split at spine head, etc, but overall a nice copy. [04666] $125.00

The explosive first memoirs of the instigator and architect of the "Affair of the Diamond Necklace".

After her conviction and subsequent escape from the Bastille, Jeanne was able to intrigue to escape the country and made her way, with her husband, to London. Once there she immediately set out on a plan of revenge against the Queen which took the form of her famous "Memoires Justificatifs de la Comtesse de Valois de la Motte". These contained her own highly slanted version of her life and the Diamond Necklace Affair, as well as some thirty pieces of correspondence she claimed had passed between the Cardinal and the Queen.

"From the moment of my arrival in London," she wrote, "my first and only thought had been publication of my justification for the eyes of all the world... I too would have preferred to spare the honour of the Queen, and I tried to warn her Majesty that I was in Possession of certain letters...incriminating her and exculpating me... All I asked in return was restitution of property rightfully mine which had been seized, after an iniquitous verdict, to enrich the coffers of the King. But I really never considered it likely that the French court would capitulate to those terms, and besides, my main goal was public vindication. To this purpose, then, I eagerly took up my pen, denying my feeble, tortured body even the minimal physical requirements of nourishment and sleep until my memoirs should be ready for publication. Although we were obliged to borrow money to defray the costs of printing, five thousand copies in French have now come off the press, and three thousand more in English; the latter went on sale at a guinea each in New Bond Street shops."

The readers of England and France could not get enough of the Countess's memoirs, although what you thought of them depended on which side of the Royal table you sat on- "a cesspool of calumny" was the verdict of the Abbe Georgel, friend and secretary of Cardinal Rohan. In October of 1789 a "Second Memoirs justicatif", much more barbed and venomous than the first, was rushed to the printers, another direct attack on the Queen by Jeanne, published in French and English and distributed in Paris where it stirred the mobs to a new frenzy. Mirabeau said of the Countess- "Madame de La Motte's voice alone brought on the horrors of July 14 and of October 5" (the storming of Versailles and the slaughter of the troops there by the 'Women's Army').

Her works spawned a storm of other pamphlets, each one trying to outdo the other in decrying the licentiousness and debauchery of the Queen. Frances Mossiker, in "The Queen's Necklace", notes, however, that's Jeanne's works were the most influential-

"There were other attacks perhaps more obscene, but they were published under noms de plume and therefore were never as pungent and convincing as those signed by a real-life name, a name famous, moreover, throughout Europe ever since the Necklace Trial".

In 1791 the Countess's two volume "Story of My Life" came off the presses, but Jeanne would not live to enjoy its fruits. In early June the London newspapers reported that a London bailiff had appeared at her lodgings to serve an order for her mounting debts. Others said that the men were actually secret agents sent by the Duke of Orleans; that was what Jeanne believed, and to get away from them she barricaded herself in and then climbed out a third floor window, falling to the street below. Badly injured, she lingered in extreme pain through the hot weeks of July and into August, when, on August 23rd, 1791, she died. She was buried a few days later in the churchyard of St. Mary's, in Lambeth. The Queen against whom Jeanne had intrigued for so long survived her by just two years, one month, and 23 days, before mounting the steps to the guillotine in Paris to the howling delight of the mob.

Hardcover. 5"x8", 258 pages. Bound in 19th century marbled boards with a leather spine, raised bands and gilt title. Light cover wear and rubbing; a little interior soil, but a very nice copy. This copy is a printing variant, featuring a cruder typeface and set-up, and cheaper paper, than the standard London 1789 edition. It also lacks the decorative device on the first page, all of which leads one to speculate that it might be a piracy. [05619] $500.00

Vizetelly, Henry. The Story of the Diamond Necklace, told in detail for the first time. London; Vizetelly & Co.: 1887. 3rd edition, revised. The third edition of one of the 19th century's classic versions of the Diamond Necklace story -in fact, one of the classic works of all time. Vizetelly's style, though Victorian in flavor, is easier to deal with than that of most of his contemporaries, and he brings the story of the Countess, the Queen and the Cardinal to life once again as the players strut upon the stage of history and tragedy... Hardcover. 5.5"x8", 414 pages, several b/w plates; pictorial cloth with a silver-colored picture of the necklace; covers with moderate soil, some wear, a bit darkened, tips rubbed, etc. Internally a few spots, a little soil, etc., but a nice copy. [04667] $200.00

An attractive period assemblage of a group of the printed pamphlets, 5 (of 6) issued by some of the figures in the Diamond Necklace Affair, comprising-

"Reponse pour le Comtesse de Valois-la-Motte, au Memoire du Comte de Cagliostro". Paris: 1786. In which the Countess wages a counter-attack against Cagliostro by pointing out what a fraud he is.

"Supplement et Suite Aux Memoires du Sieur de Bette d'Etienville, Ancien Chirurgien Sous-Aide-Major, Pour servir de Reponse aux differens Memoires faits contre lui". Paris: 1786. Jean Charles Vincent de Bette d'Étienville became involved when he persuaded the Baron de Fages-Chaulnes to marry one of Cardinal Rohan's mistresses, as a result of which the Baron ran up a steep debt with Vaucher & Loque, a pair of jewelers. As the Baron was involved in an intrigue with the Cardinal, and had also been used as a fence for the diamonds, and the prevailing mood was "arrest everyone", d'Etienville found himself a defendant... This eventually also involved the innocent Comte de Precourt (see below).

"Memoire de M. de Calonne, Ministre d'Etat, Contre le decret rendu le 14 fevrier 1791 par l'assemblee se disant nationale". Charles Alexandre de Calonne was a friend of the de Polignacs, intimates of Marie Antoinette, and succeeded the popular Jacques Necker as Finance Minister. Necker had favored borrowing over taxes and brought the country to the edge of bankruptcy, but Colonne's plan to correct this by taxing the nobility caused his sacking. Necker was brought back one last time and his second firing was the spark that led to the storming of the Bastille. Colonne and Necker engaged in a furious "pamphlet war" for several years. Here Colonne defends the du Polignacs against a judgment of 800,000 livres related to the debt. 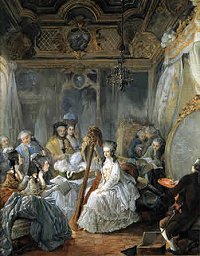 Return to "The Affair of Diamond Necklace"

Go to Books about Jewelry